ROT IN bits and pieces

I've picked up a few Rot In Hell odds and ends recently, spread across a number of analogue formats so thought I'd throw them altogether here. First up, I grabbed a red copy of the split with Vegas (or VVegas if you are kvlt), completing the set on that one. Excluding a test press, although I do have my eye on one of them. This red one is out of 200. A more detailed look at the innards of this record can be found here

Yellow/300, Red/200 and the black is the Organized Crime Halloween exclusive, numbered out of 165.

When I ordered the red directly from the band, Mike was cool enough to throw this in: a 3inch CD that you could originally only get if you ordered the Iron Column / Rot In Hell skateboard deck. It features a cover of an Ides Of Gemini (EDIT: no it isn't, it's a Theatre Of Hate/Spear of Destiny cover, I'm an idiot and was rightfully reminded of such below) song, sealed with a process octopus wax stamp. Mines staying sealed, but the song is great; carried out in the bands acoustic style with POI on vocals.

When I went down to the Carry The Weight Records Fest in November last year, Rot In Hell played and had with them a set of 13 cassette tapes, only avaliable at this show and featuring unreleased tracks. 13 is a ludicrously small number and I was pretty sure I wouldn't get one. Thankfully, not as many people at the show are as cool as me and I snapped one up without any issue. They were sold out of an Adidas shoebox, with a sign on a bit of cardboard saying that they weren't 'on sale to dickheads'. Turns out, I'm not a dickhead. Look, ma.

Finally, the newly releasesed Termini Terrae 7", on a resurrected record label and with a rejuvenated Rot In Hell line-up following a bit of inner turmoil. Any doubters will rightfully be knocked into line, as this is an absalute belter. Released by Dark Empire (originally ran by Dwid in the 90's, now brought back from the dead and ran by his son Max) this is on white and blue, both out of 100. Both sold out at pre-order stage but since that it's also become avaliable on red and black too. I never thought I had much of an audiophile's ear and don't usually pick out the subtle differences between digital and vinyl but after listening to this for weeks and weeks on mp3, finally putting this 7" on revealed all kinds of nuances and detail in the production.

Figured I'd re-pop my vinyl blogging cherry with one of, in my opinion, the best UKHC 7"s released this year: the Natural Order EP. Featuring members of Ark of The Covenant, More Than Life and with one Mike Carver (ex-Deal With It) on vocals, it is quite simply fucking awesome. This was released by UKHC movers/shakers Purgatory Records, but you can only buy it direct from the band who are distributing it themselves. Carver's vocal style is markedly different than Deal With It, sounding like a rabid beast. Honestly, this is one not to miss if you like things on the heavier, nastier side. Pressed on a ridiculously thick, heavyweight vinyl, this colour is limited to 200 and looks like a punched eyeball.

So yeah, I was going to henceforth blog about the un-blogged in the order that they are leaning against the wall. But then this arrived a couple days ago which was so exciting that it's jumped the line because it made me want to stop what I was doing and take pictures of vinyl like I've got nowt better to do. So, we have the Organized Crime Records re-issue of Integrity's 1995 masterwork Systems Overload. Carrying on in the style that OCR are re-issuing Integ's early work, this has more attention to detail that I can deal with. First things first, custom record mailer.

Just to whet your appetite.

I went for the version with the extra cover art, on a clear/grey smoke pressing. These are limited to 320, with numbered sleeves.

Similar to the extra sleeve for TWFT.

That's the back, fans.

Anyway, pull that back and the regular cover is underneath, with vastly expanded artwork from the original.

Track listing is revealed on the back when shown the light.

Again, the credits inside the gatefold are revealed when exposed.

The vinyl itself looks incredible.

Inside one of the sleeves, a lyric sheet and on the flip of that, great anecdotes from A. Melnick.

And if that wasn't enough, a print of J. Melnick's Armenian Persecution painting

And there is more. Inside the mailer, there was also a large brown envelope, sealed with a little clasp. On the envelope was written 'Pre-Order Package Series #3 Limited Edition Of 100'

And in there, a ton of flyers from back in the 90's. Awesome.

I mean. Wow. The amount of effort that Clint at OCR, Dwid, various Melnicks and anyone else involved has put in is simply staggering.

Doesn't hurt that the songs will still kick your teeth in too.

Dawn Of A New Apocalypse

Right, been a while! Last time I did a post I was thinking all like "Ok, I'm gonna post a shit load all at once and get caught up and vinyl blogging life will be good". And then I didn't. Truth is, this other thing is taking up any spare time I have for writing. This thing:

You may or may not remember but for a while I had a second .blogspot blog where I wrote about music that buzzed me, without the vinyl part. Well that really took off. Labels were sending me lots of music to review, same for bands who had just put out a demo and wanted some exposure. It gained enough speed so that I dropped the .blogspot bit, bought a domain and had the site built by a guy who knows his HTML. And Tight To The Nail was officially born. There's usually a new review up there almost every day, so if you want to check out what labels like A389, Southern Lord, Deathwish, Feast Of Tentacles, Carry The Weight, Tiny Engines etc are putting out, then stop by. There's also a lot of coverage of new bands or bands self releasing their music, and links to their stuff which is usually free to download. So there's a decent spread between bands you'll know, and bands you won't.

Anyway, that's why I'm slack. But I'm going to keep this thing here going as much as I can. So here's one from the pile that Rich from Ignite Records in Birmingham sent me. He sold out of the stock he had in for RSD2012, but had a few more come in from Organized Crime and sent me one in the post. Rich is a good guy. This is the Euro pressing, on grey out of 325, and a repress essentially, as this was available before in various incarnations. I'm no great fan of live albums, and the sound quality ain't the best, but it suits the anarchic energy of the show and this is actually a good listen, capturing an early time for the band where they give a raucous and provocative performance. Something that the cool little recounting of events by A-Double try to capture in the new linear notes.

Collecting The Wonder Years - part 4 : "Punk Is Dead Get A Job"

This is the latest thing to be released by TWY, and so shouldn't have proven too tricky to get hold of in my long-game odyssey to pick up everything they've released. But, this thing sold out so fast at pre-order, I hadn't even realised it was available to pre-order before it was gone. 1000 copies in all, spread between 500 black swirl, 300 black/clear split and 200 black. Gone. Once they started shipping out, it was pretty easy to see where a few of the copies went : straight to the flippers

Fuck that. I was pretty mad. But as luck would have it, Craigos had a spare copy and offered to sell it me, at the same price he bought it for, plus postage from Australia to the UK obv. Top dude. It was the clear/black split version, and I was more than happy with that. A few days later, it turned up, and life was good again.

Love what they did with the artwork on this, making it look like a filled out IRS form, with band name, record label and lyrics in the boxes, pretty cool.
Oh yeah, I should probably mention that this is actually a split with Stay Ahead Of The Weather, who feature members of Into It/Over It and CSTVT. That song is great, but it's all about TWY side for me, their song is fucking magnificent.
For the iNerds among us, that Blogger app is actually pretty shit. Not letting you dictate the order of photos, not allowing you adding text in between them, no ability to create links. So I've abandoned that. BUT I did just get one of the 'new' iPads, and have been using an app called Blogsy. Which is a shit name, but it let's you do everything. In fact I think it let's me do more than I can work out on the Blogger site. This post was made with it and look, links and everything.

Email ThisBlogThis!Share to TwitterShare to FacebookShare to Pinterest
Labels: The Wonder Years

Dragged Into Sunlight - Hatred For Mankind

I first got into Dragged Into Sunlight a while ago when I kept hearing all this buzz about a black metal group from Liverpool here in the UK. They were pretty much being touted as the most brutal and unrelenting thing going, I was powerless to resist. I wasn't let down either, in fact, my expectation were exceeded. Aided by a grimy, lo-fi production, this record is grim, uncompromising and nasty. Not in any theatrical or gore-nonsense way either,  it's just straight up, no bollocks, hard black metal, but utterly devastating. They always play with their backs to the audience too, which I can't help but think is kinda cool. When this first came a couple years back it was CD only, but Mordgrimm have recently given it a vinyl release and put a lot of effort in. Thick cardboard gatefold, real high quality artwork print and hefty 180 gram vinyl. A run of 300 on white. The front cover to this is a bit NSFW, so it's one the kids won't be seeing sitting next to the record player for all to see for a while. 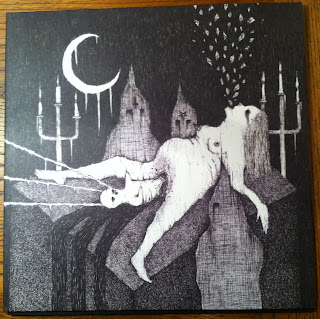 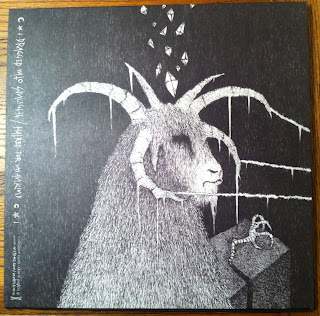 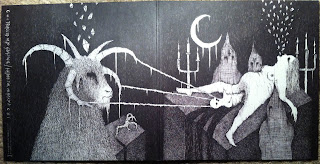 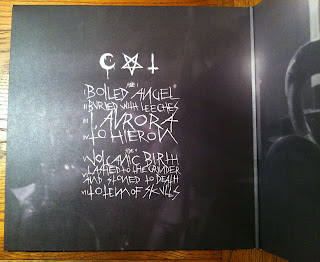 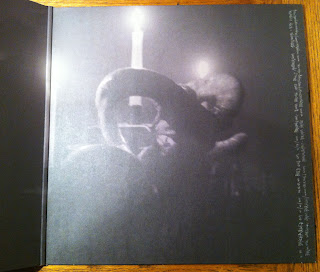 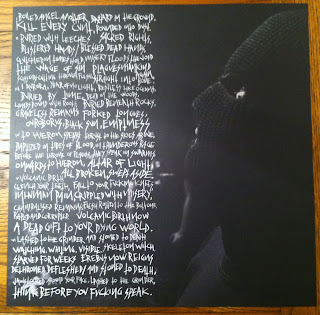 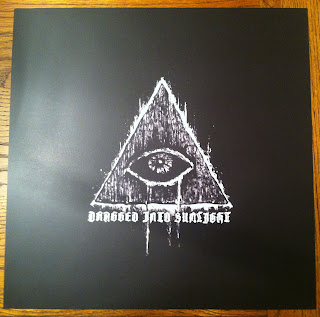 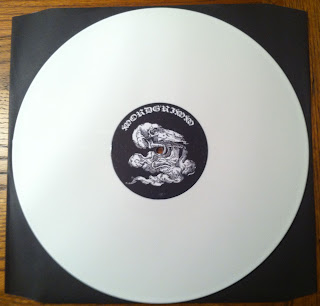 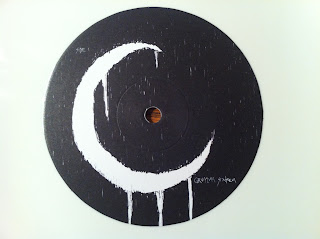 Those Who Blog Tomorrow